DexCom (NASDAQ:DXCM – Get Rating) had its price objective raised by stock analysts at BTIG Research from $535.00 to $560.00 in a research note issued on Monday, The Fly reports. BTIG Research’s price target would indicate a potential upside of 13.80% from the stock’s current price.

DexCom shares are going to split on Friday, June 10th. The 4-1 split was announced on Friday, March 25th. The newly minted shares will be issued to shareholders after the closing bell on Thursday, June 9th.

DexCom (NASDAQ:DXCM – Get Rating) last announced its quarterly earnings results on Thursday, February 10th. The medical device company reported $0.68 earnings per share (EPS) for the quarter, missing the Zacks’ consensus estimate of $0.86 by ($0.18). DexCom had a return on equity of 12.87% and a net margin of 6.32%. The firm had revenue of $698.20 million for the quarter, compared to analysts’ expectations of $698.66 million. During the same period last year, the company posted $0.91 earnings per share. The business’s quarterly revenue was up 22.7% on a year-over-year basis. On average, equities analysts expect that DexCom will post 3.39 EPS for the current year.

DexCom, Inc, a medical device company, focuses on the design, development, and commercialization of continuous glucose monitoring (CGM) systems in the United States and internationally. The company provides its systems for use by people with diabetes, as well as for use by healthcare providers. Its products include DexCom G6, an integrated CGM system for diabetes management; Dexcom Real-Time API, which enables invited third-party developers to integrate real-time CGM data into their digital health applications and devices; Dexcom ONE, that is designed to replace finger stick blood glucose testing for diabetes treatment decisions; and Dexcom Share, a remote monitoring system. 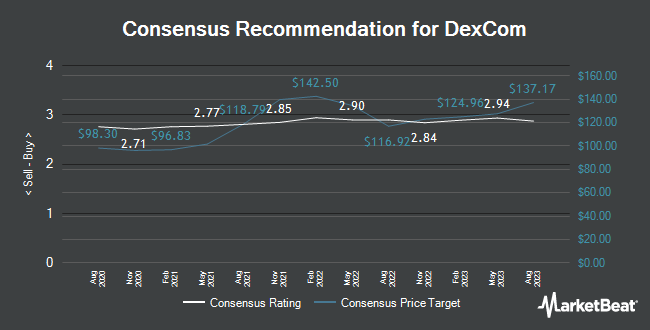 Receive News & Ratings for DexCom Daily - Enter your email address below to receive a concise daily summary of the latest news and analysts' ratings for DexCom and related companies with MarketBeat.com's FREE daily email newsletter.

Complete the form below to receive the latest headlines and analysts' recommendations for DexCom with our free daily email newsletter: