Royal Gold, Inc. (NASDAQ:RGLD – Get Rating) (TSE:RGL) – Analysts at Raymond James dropped their Q2 2023 earnings per share estimates for shares of Royal Gold in a research note issued to investors on Tuesday, April 19th. Raymond James analyst B. Macarthur now anticipates that the basic materials company will earn $0.93 per share for the quarter, down from their prior estimate of $0.94. Raymond James currently has a “Outperform” rating and a $145.00 target price on the stock.

Royal Gold (NASDAQ:RGLD – Get Rating) (TSE:RGL) last posted its quarterly earnings results on Wednesday, February 16th. The basic materials company reported $1.05 EPS for the quarter, topping the Zacks’ consensus estimate of $0.94 by $0.11. The business had revenue of $168.52 million during the quarter, compared to the consensus estimate of $160.82 million. Royal Gold had a return on equity of 10.42% and a net margin of 41.93%. The company’s revenue for the quarter was up 6.4% compared to the same quarter last year. During the same period last year, the firm earned $0.92 earnings per share.

In related news, CFO Paul Libner sold 1,200 shares of the business’s stock in a transaction that occurred on Tuesday, March 1st. The stock was sold at an average price of $125.00, for a total transaction of $150,000.00. The sale was disclosed in a legal filing with the SEC, which is available at this hyperlink. Insiders own 0.35% of the company’s stock.

The firm also recently declared a quarterly dividend, which was paid on Thursday, April 14th. Stockholders of record on Friday, April 1st were issued a dividend of $0.35 per share. The ex-dividend date was Thursday, March 31st. This represents a $1.40 dividend on an annualized basis and a dividend yield of 1.02%. Royal Gold’s dividend payout ratio (DPR) is presently 33.57%.

About Royal Gold (Get Rating)

Royal Gold, Inc, together with its subsidiaries, acquires and manages precious metal streams, royalties, and related interests. It focuses on acquiring stream and royalty interests or to finance projects that are in production or in development stage in exchange for stream or royalty interests, which primarily consists of gold, silver, copper, nickel, zinc, lead, and cobalt. 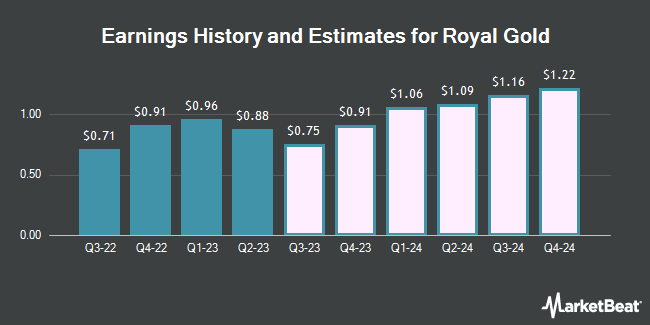 $12.75 Billion in Sales Expected for The Progressive Co. This Quarter

Complete the form below to receive the latest headlines and analysts' recommendations for Royal Gold with our free daily email newsletter: